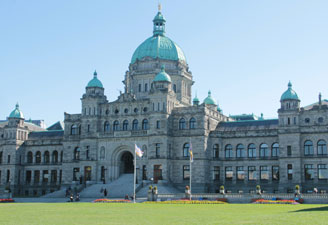 The Parliament Buildings are a landmark in Victoria, the capital of British Columbia.  Construction of this great architectural building started in 1893 and was lead by a 25-year-old architect by the name of Francis Rattenbury. During Queen Victoria’s Diamond Jubilee in 1897, construction was deemed complete, however, details, refinishing, additions and upgrades were ongoing right up until 1915. Francis Rattenbury and his crew made an effort to use local materials, resources and expertise when building the Parliament Buildings, as during this time in B.C. it was important to both him and the government to support local businesses. Granite rock foundations were brought in from nearby Nelson Island, the site facades were locally imported from Haddington Island, and most of the local brick, lime and Douglas Fir were accumulated from areas around Vancouver Island.

The inside of the buildings are just as grand as the outside, which features a statue of Queen Victoria on the front lawn.  You can book tours of the buildings that will give you both insight and perspective on the historical significance of Victoria as the command center for British Columbia. The Parliament Buildings are also worth a visit at night-time, as the 3,300+ light bulbs that adorn the façade are lit up, casting a magical glow over the harbour.

The political governing body – elected by British Columbians – assembles in this house to pass law and make decisions affecting the future direction of the province.

Some of the nearby attractions include Beacon Hill Park, the history of the BC Royal Museum and the shops, boutiques and artisans in the downtown core on Government Street.

The BC Parliament Buildings provides guided tours Monday to Friday. Tours are provided in both official languages of Canada – English and French – and can be arranged in other languages when notice is provided.

10 Things to Revive your Holiday Spirit

10 Reasons to Visit Victoria in 2017
Scroll to top