The Craigflower Farmhouse and School are two important pieces of Victoria’s history, marking some of the earliest buildings of the pioneering era of British Columbia. Built in 1856 and 1855 respectively, the farmhouse and school were part of an early Hundson’s Bay Company farm and settlement community. Both give you a glimpse into life during the earliest settlements of Fort Victoria, and how the first settlers lived. Both sites are quiet compared to the more touristy attractions of Victoria, BC, offering a reprieve from the crowds and classic sights. Guided tours will give you more information on the interesting heritage sites. In fact, it’s not a rare occurrence to have the whole place to yourself! Not only will you be able to peek into family life in the 1850s, but you’ll also learn about Victoria and the Hudson Bay Company’s first agricultural endeavors, and British Columbia’s first educational system, put in place by Governor James Douglas. He feared that the children of the settlers were going to neglect their societal and Godly duties if they grew up in ignorance. In 1873, schooling was made mandatory for kids aged seven to fourteen. 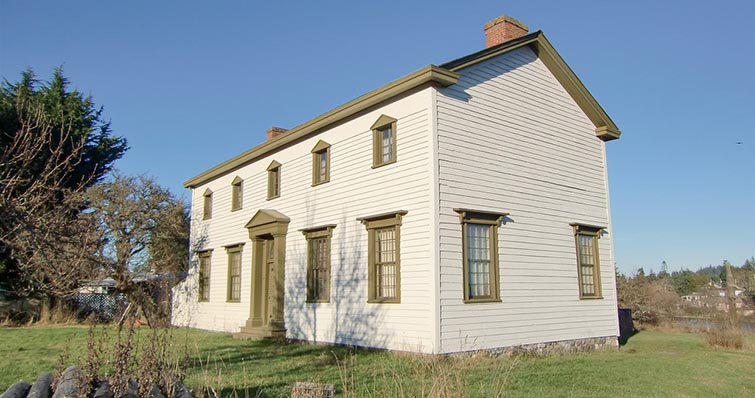 The Craigflower School started off as “Maple Point School” and was meant to provide education for the farm’s employee children. From its construction in 1854, straight through until 1911, the schoolhouse did just that, with the exception of one year when town council decided against funding for Victoria’s schools. Then, in 1911 the Craigflower School was built across the road. It became Craigflower Elementary School when it was replaced in 1964. From 1931-1975 the original schoolhouse was run as a museum until it was taken over by the Hallmark Heritage Society. Now, it is open during the summers for special presentations, as well as heritage workshops. The schoolhouse is a basic, two-story clapboard building of basic 19th century construction. Its gabled roof, large fireplace, which was used to heat the school, as well as its significance and position have made the humble school house a National Historic Site of Canada.

The Farmhouse, also known as the Craigflower Manor, or just “The Manor,” was built just after the schoolhouse in order to accommodate the Craigflower Farm’s manager and family. It’s perched across the inlet at the entrance of View Royal in Victoria, BC. Kenneth McKenzie was hired by the Hudson’s Bay Company in order to manage a large farm in Fort Victoria. He and his family made their way from Scotland to British Columbia in 1856, and the house is said to have resembled the Georgian-style house they lived in back home. While the rooms aren’t large, they have been painstakingly restored to their 1800s glamour, and would have been considered quite ritzy compared to the cottages of other settlers at the time. Upon being forced to leave the farm in 1866, the McKenzie family removed all of their belongings, so very few original features remain in the house today.  Having been restored in 1970, the farmhouse and school both make for a fun walkthrough with a tour, especially for history buffs and those that want to step back in time. The Farmhouse is also a National Historic Site, and is one of the oldest houses in British Columbia.