The Confederation Garden Court is a small, yet pleasant paved square beside the Parliament Buildings and tucked in beside the Grand Pacific Hotel. While pleasant for a quick walkthrough when in the area, the Confederation Garden Court has great significance within the city. The plaza was built in commemoration of Canada’s centennial year of confederation in 1967. The peaceful place features a relaxing tiered fountain with a full waterfall cascading down a stone wall just beyond it. Canada’s coat of arms resides in front of the pouring water, and the falls are flanked on each side by the shields of Canada’s thirteen provinces and territories. Beneath each shield is the province or territory name, and the year it joined Canada. The earliest provinces to join confederation were New Brunswick, Quebec, Ontario and Nova Scotia in 1867. British Columbia entered confederation in 1871, and the last to join was Nunavut in 1999. As the shields had already been in place for over thirty years by the time Nunavut was deemed part of Canada, their shield was the last to be installed. It’s on the far right when you’re facing the waterfall.

The area itself is maintained by the Legislative Assembly of British Columbia, and is a serene, unexpected haven for passersby. After the rush of downtown and the bustle of Parliament’s front lawns, taking a break to the sounds of falling water makes for a wonderful pit stop. The plaques are intriguing to look at and read, and the small court provides a calming atmosphere. At one end of the court you’ll also find a plaque marking where a time capsule was placed. It was put there on New Year’s Eve in 1967 with plans to be opened on January 1, 2067 for Canada’s bi-centennial.

While relatively new to the city, the Confederation Garden Court is an important piece of time and history for the city of Victoria, and will continue to be so with the opening of the time capsule. 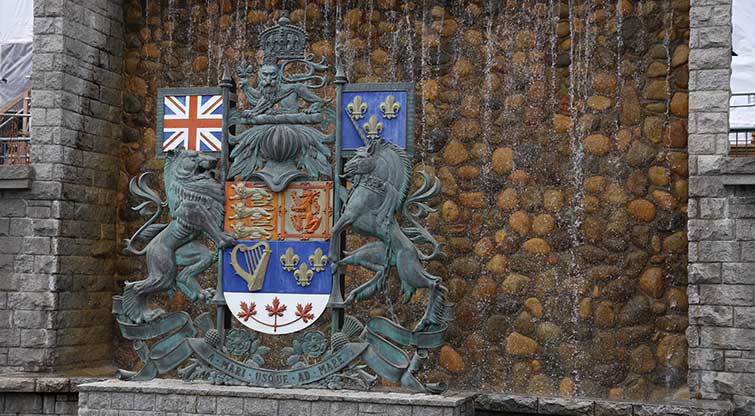